Early History of the Town of Frankfort

Town of Frankfort is located in the southern section of Herkimer County. The land on which the present village stands was once the land of the Mohawk Indian Tribe. The land was bought by the Dutch who established patents encompassing a large area in the Town of Frankfort.

The First permanent settler was Jacob Folts, who had come to America in 1710 and settled here after purchasing lot#3 of the Burnetsfield Patent in 1723. In 1796 Major Warner Folts built the Folts Homestead on the land.

Another early settler was Lawrence Frank, for whom our town was named. Early pioneers were German immigrants, who were called Palantines because they came from the Lower Palatinate of the Rhine River. They settled in the Mohawk Valley prior to the Revolutionary War, building mills on the river and creeks. By 1757 there were saw and grist mills in the area but were burned during the French and Indian War raids. Unfortunately the area had very little time to rebuild before being totally destroyed during the Revolutionary War.

Regrowth began when post-revolutionary settlers came from New England. They began to settle at points south and west, and in a few years the whole town was settled. In about 1800, several Welsh families settled in the western limits of the town, this area became known as "Welsh Bush."

Howard's Bush, now the Frankfort Center, was so named for the family named Howard who located there.

John Hollister built a saw mill on Moyer Creek in 1794 and the following year he built a tavern. In 1795 another tavern was opened one half mile west of the present village by John Meyer.

The Town of Frankfort was set off from the Town German Flatts by an act of the Legislature on February 5, 1796. At the time of its incorporation, the western boundary of the town was at what is now the foot of Genessee Street in Utica. A state road was established between Utica and Schenectady by an act of Legislature in 1798. This road ran along the south side of the river through Frankfort. In 1850 this road was converted into a plank road and was Mohawk Plank Road, this of course now being Old 5s. In about 1825, the Legislature appointed commissioners to build a road from Frankfort to Litchfield traveling along the Moyer Creek Gulf, now known as the Gorge Road.

The area which is now the Village of Frankfort grew slowly and by 1807 there were only seven houses, with four of these being made of logs. The Frankfort Woolen Factory was built in 1807 by Joseph Ingham of Schuyler and Joseph Collins of Frankfort.

In 1808 Adam I. Campbell built a grist mill on Moye Creek and remained open until 1823 when the building was abandoned. Jacob Weaver opened a tavern in 1810. The following year Mr. Griswold established a tannery, which remained in operation until 1860. In 1814 Matthew and Michael Myers opened a store directly across from the woolen factory and in 1816 they also built an ashery on the bank of the Mohawk River.

In 1818 a joint stock company established the Frankfort Furnace bringing in their ore from the Clinton area and smelted it with charcoal. At one time this business employed thirty people and manufactured hollow ware, stoves and cast ploughs. This company was later abandoned.

A distillery opened in 1820. George W. Henry established a cowbell factory in 1823. This company thrived and continued to expand into other areas over the years. Also in this same year, another grist mill was built near the Hollister mill, lasting 30 years until destroyed by fire in 1853. A paper mill was erected on this same site in 1853 which was later converted to a distillery and then into a grist mill.

In 1840, Frankfort was the chief industrial center of the Mohawk Valley community, which at this time had a total population of 2,400. Frankfort consisted of 500 citizens and 100 dwellings including: a Dutch Reformed Church, a Baptist Church, eight stores, a woolen factory, a grist mill, a saw mill, a distillery and a tannery.

William Gates established the plant along the Erie Canal for the manufacturing of wooden matches. All work was done by hand until Mr. Gates invented machinery. He later added other buildings and by the 1850's the Match Factory was the largest employer in the town of Frankfort employing over 300 workers. The company joined with the Diamond Match Company and in 1900 moved to Oswego to be closer to its suppliers.

A paper company later took over the buildings and today there is a monument in the park commemorating the founding of the Match Factory.

In 1850 our community had a population of 1,150, Ilion had 812 , and the Valley had a total population of 4,688. The area was growing and businesses were very prosperous. In 1863 the Village of Frankfort was incorporated and by 1870 the total population of the Village was 1083. Frankfort Center, which was near the geographic center of the town was in 1877 a hamlet of about twelve houses. There was a union meeting house, a saw mill and a cheese factory.

West Frankfort was also called Four-Mile Grocery because it was about four miles east of Utica. By 1878, this area boasted of a hotel, a store, some mechanics' shops, and about twelve houses.

East Frankfort was at one time known as McGowansville, after Archibald McGowan. He settled in this area, establishing a dry dock and a store along the Erie Canal in 1857. Mr. McGowan was very active in the community. He served not only as the supervisor in the town for several years but also served two terms on the assembly and as a senator.

In 1883 the village donated $75,000 worth of real estate to the West Shore Railroad to insure that they would settle in Frankfort. Vigorous bidding occurred across the state, but Frankfort won. The shops set up by the railroad employed several hundred men year round with over 200 people employed between 1883 and 1900. The building of the railroad inspired Italian immigrants to come to Frankfort. The influx of immigrants continued until 1924, when the shops were closed. 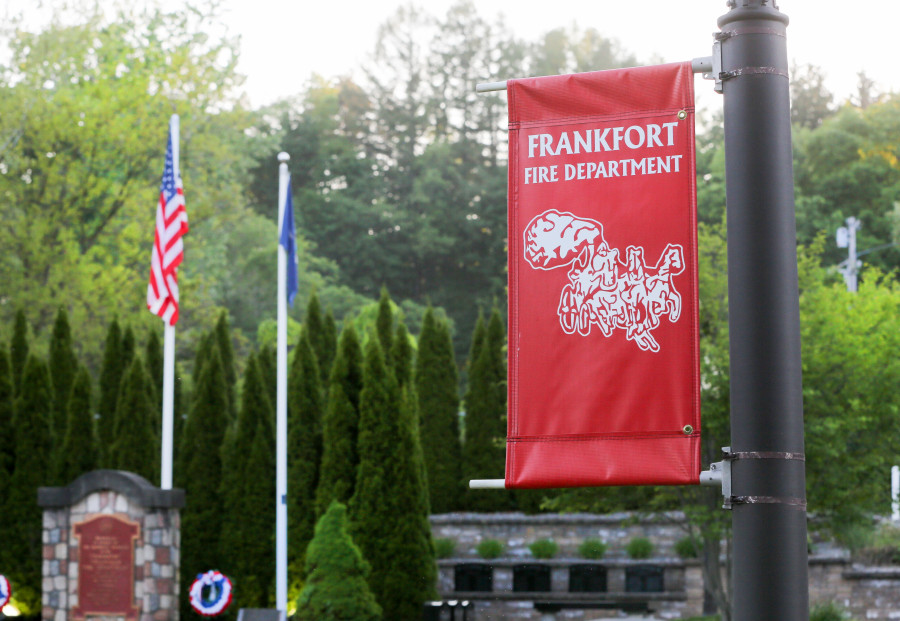 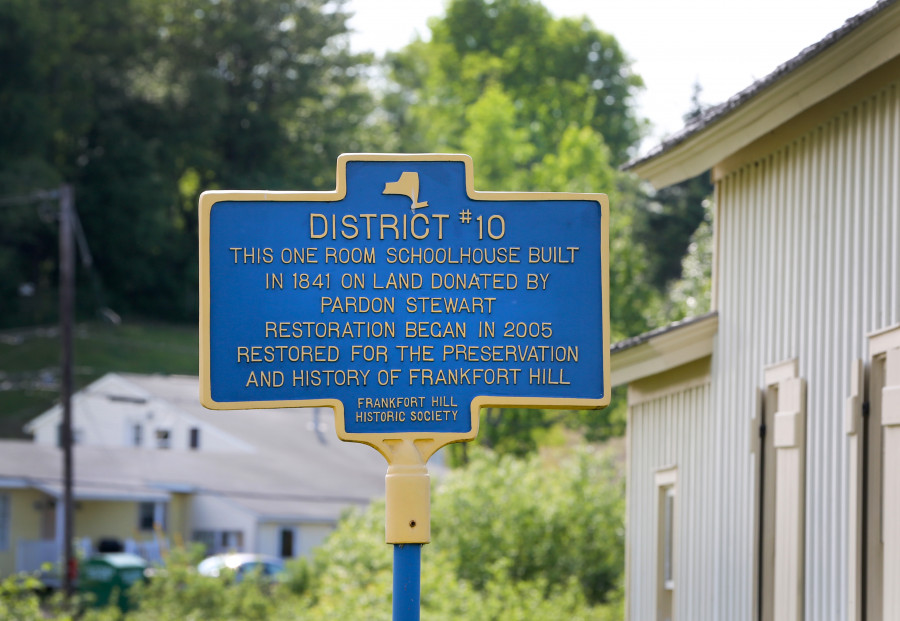 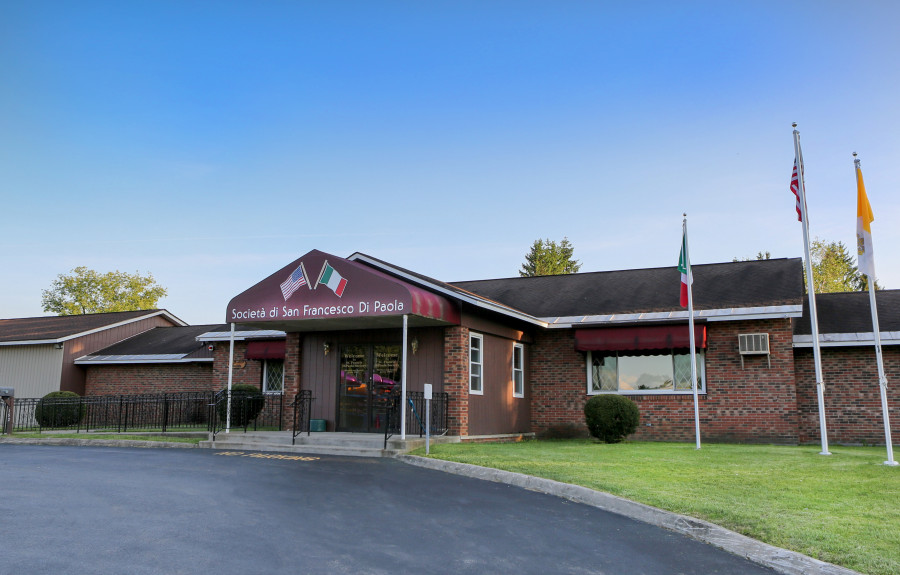 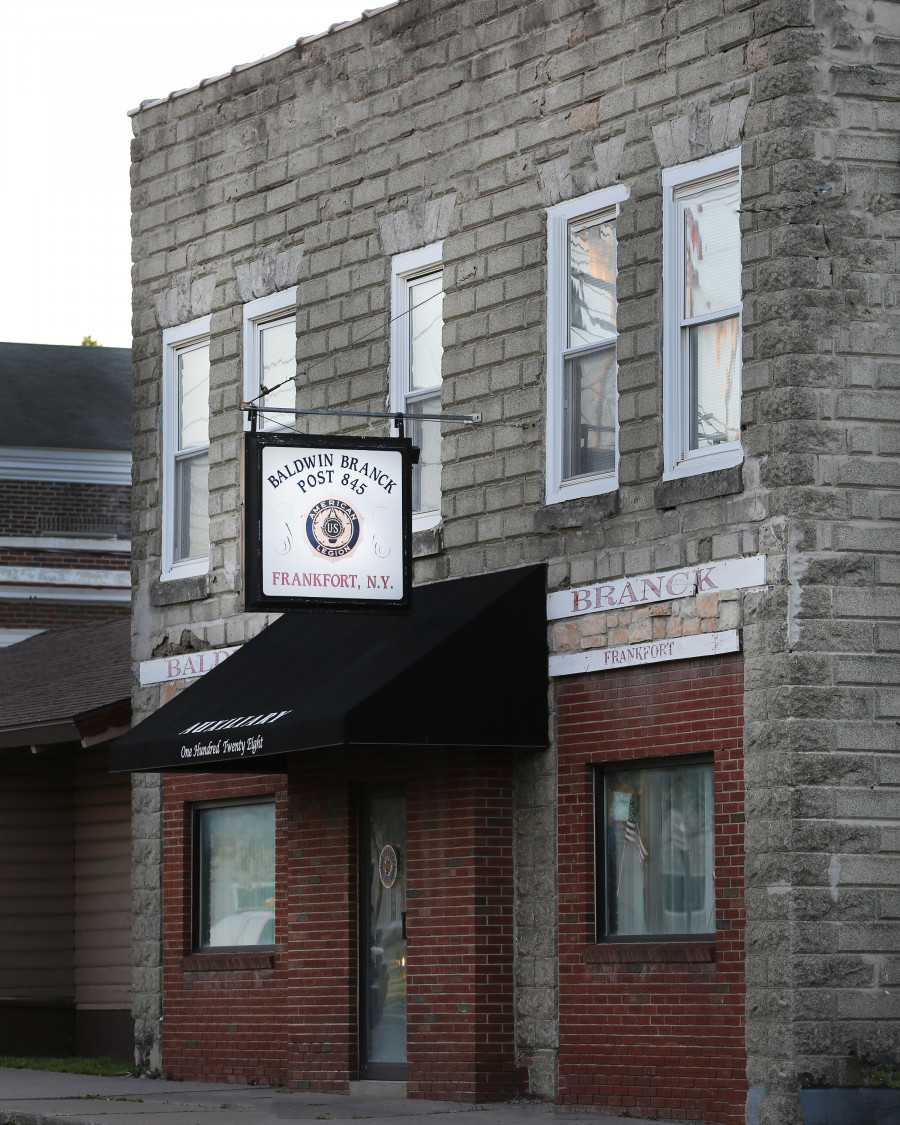 Jan. 1950 - Ten miles east of Utica, where the Mohawk Valley widens out, lies the industrial village of Frankfort, the fourth largest in Herkimer County.

Like its larger neighbors, Ilion and Herkimer, Frankfort had its beginnings in the Palatine German farm settlements of the early 18th century.

The community figured in the French and Indian wars of the 1750's and later in the raids and skirmishes between Tory-Indian and colonial forces in the Revolution.

Frank's Fort, built in those days and named for one of the colonists, gave the community its name, in a shortened form adopted about the time New England emigrants began to establish the first industries in the valley.

Whiskey and gunpowder were among the first manufacturers in Frankfort. A rectifying plant made a finished product of the raw liquor brought down from the hills by farmers, and there was a distillery where passersby reportedly could sample the product from a spigot in the wall!

Matches and balloons, however, are the items for which many old-timers remember Frankfort.

The first practical sulfur match made in the United States came from Frankfort, from a factory which William Gates founded shortly after the Civil War.

Gates made a fortune from the business, and the employment it furnished attracted many workers to the community and put it on the industrial map for the first time.

Gates' three sons took over the match factory when he died. Later, however, they sold out to the Diamond Match Co. of Oswego, and the plant was converted into a knitting mill.

After housing a paper mill for several years, the factory was partially destroyed in a fire and the rest of it was dismantled. Its site today is a village park.

Fred Gates used part of his inheritance to build a huge, 30 room home, now called the Gates Mansion. The mansion was later purchased by the man who operated Frankfort's most unusual business of all time - balloons.

Almost exactly halfway between New York City and Buffalo, Frankfort was chosen as the site of the main shops of the West Shore Railroad in the 1880's.

The railroad foundry, the paint and carpentry shops, the round house, the crippled-car shop and other buildings provided, until 1898, employment for about 800 people.

Then the New York Central System, new owners of the West Shore, moved the shops towards Buffalo, calling the new town DePew in honor of Chauncey M. DePew, the President.

The removal of the shops was a severe blow to Frankfort, one which many thought would be the end of Frankfort.

Community leaders, however, got together to form the West Shore Shop Committee and reached an agreement with the New York Central to encourage new industries in the town.

By the agreement, which was set for 99 years, the committee has control of the rentals on all the railroad property, which lies along Main Street south of the State Barge Canal and the Mohawk River. The committee requires that lessees employ at least 25 persons continuously. In return, they are spared all charges except taxes and insurance.

Under this encouragement, the Continental Tool Co., now Union Tools, came to Frankfort in 1900, and was expanded in 1906 and 1907 to form the Continental Work of the Union Fork & Hoe Co.

The Pratt-Chuck Co. set up its Liberty Fork and Hoe works shortly before World War I, and this plant was bought by Union in 1917.

Other industries within the township were the Acme Road Machinery Co., the new, multi-million-dollar Chicago Pneumatic Tool Co. plant and a large part of the Savage Arms plant.